We have enjoyed two days in the 70's. Everything is blooming and bursting open in the sunshine. Mum's garden survived the winter and the iris's and hydrandea are growing nicely. 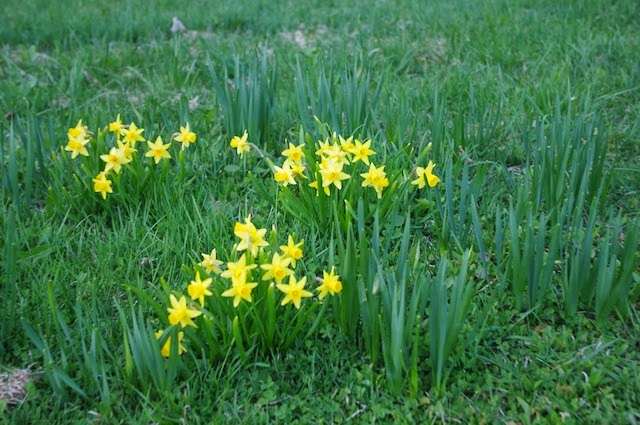 We started on the vegetable patch today. 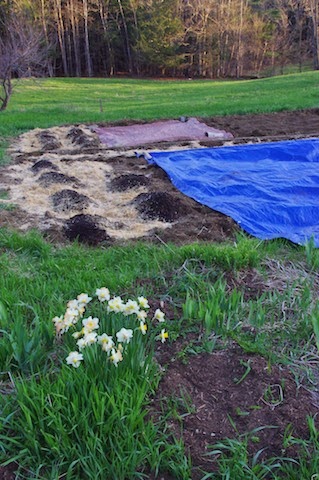 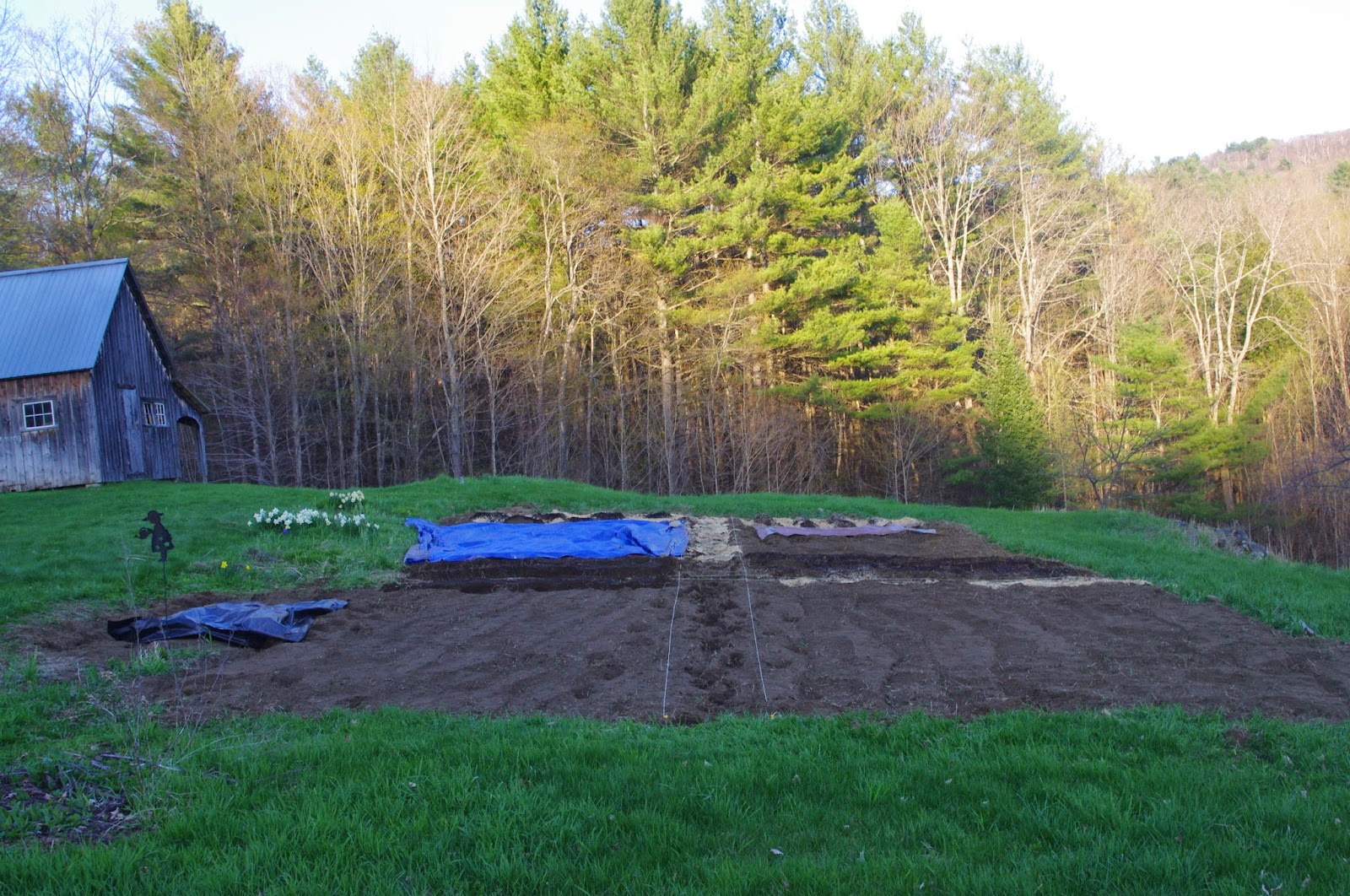 Everything is growing again - yippee! 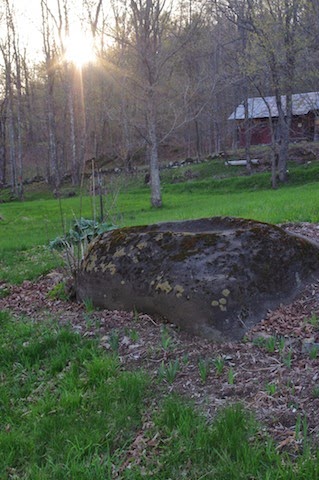 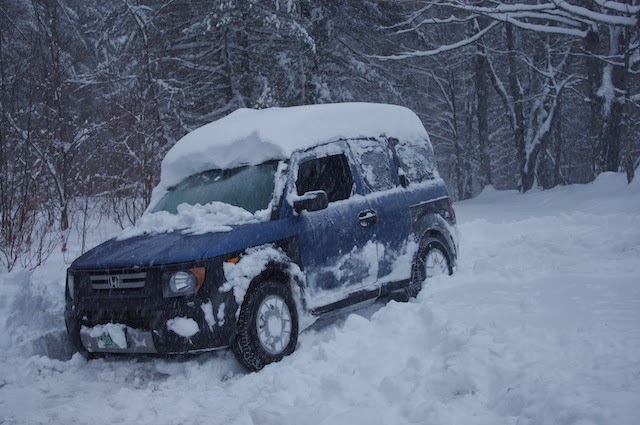 Our darling Marion turned 13 on January 27. Fabulous in every way, we are so happy to watch her get on her way - to where - who knows but life to Marion right now is rich and alive. We are constantly astounded by her, she brings so much joy to our family. 13 cheers for Marion! 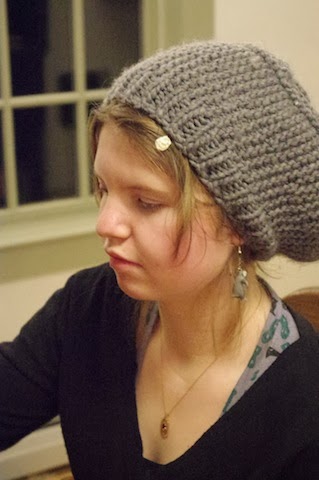 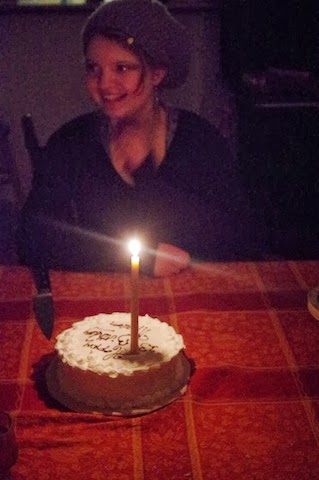 If I was going to cheer out for another member of our family it would be this fella in the basement.
Please meet The Tarm: 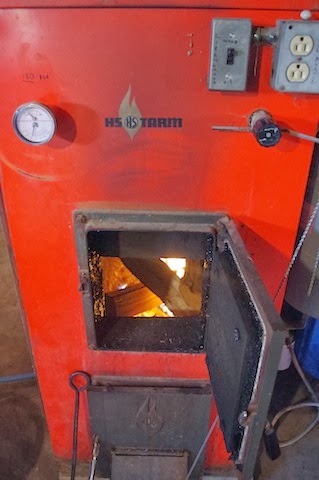 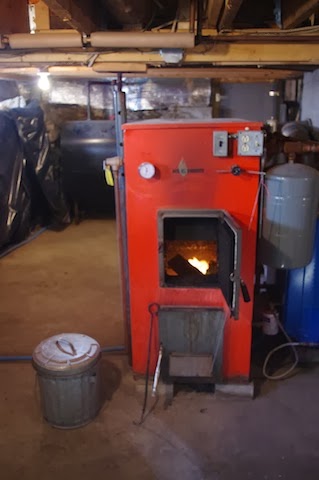 Yes, central wood heat is a thing of beauty. I never believed I would light so many fires in my lifetime, nor stack so much wood but when the house is cozy and the oil tank is full because we're not using oil, well, it  gives me a similar feeling to having a lower deductible health insurance. Lovely, peaceful, warm, good for everyone and not so darn expensive too. 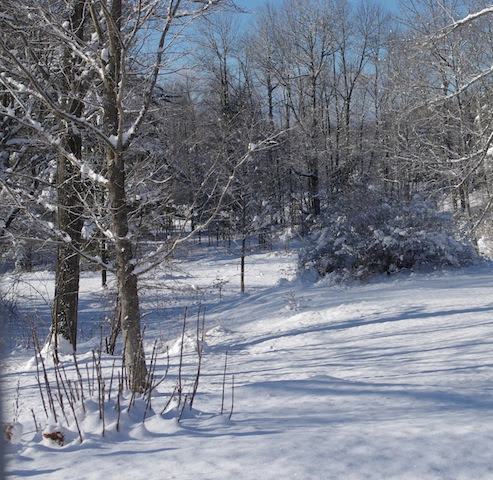 A Happy New Year to you all. We are snowed in again today. I have learned to enjoy the feeling of being completely stuck in one place. We have wood, milk and tea. Charlie is singing classical tunes as he sets up an epic Lego star wars battle on the still extended dining room table. The bakery has a sandwich maker now after a no call no show.

Again I am lost to describe the snow. It is floating down steadily, small little flakes, adding to the already laden ground. It is completely different to the snow we had the other night and yet it is just as white and just as in need of shoveling. It is scenic in the most cliche way, there was even a plump deer taking shelter under a big snow laden fir tree at the bottom of the meadow. 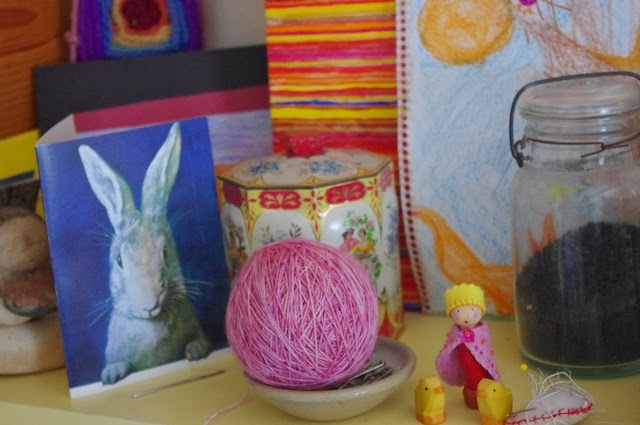 Everything colorful takes on a brighter hue in the winter. I love color. I have always loved the idea of having a house filled with neutrals and modern sparse clean lines and have hoped that I was capable of creating that space but my new years 'accept this about your self and move on moment' is that I love color and tend to put it anywhere I find a neutral or modern sparse clean line. 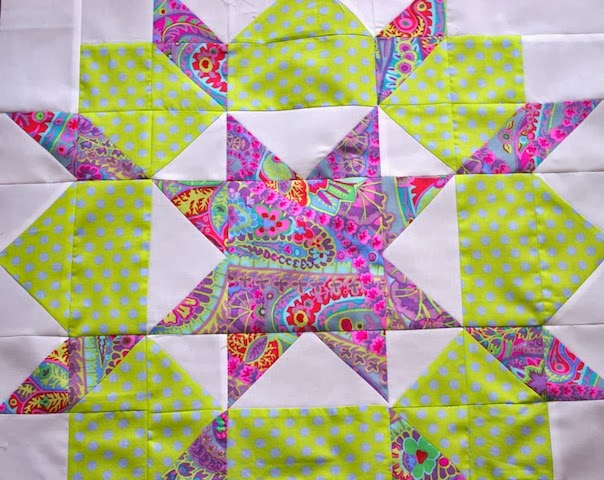 Apart from enjoying the holiday and reflecting on the year gone and coming and getting the lesson plans done for the new year, I like to get a little quilting in. These are 2 of 9 blocks I am working on right now. All very precise and careful work which I think is good for my naturally sloppy self. Character building stuff is quilting, well for me anyway. Some of the other color combinations are below. Nice and bright no? 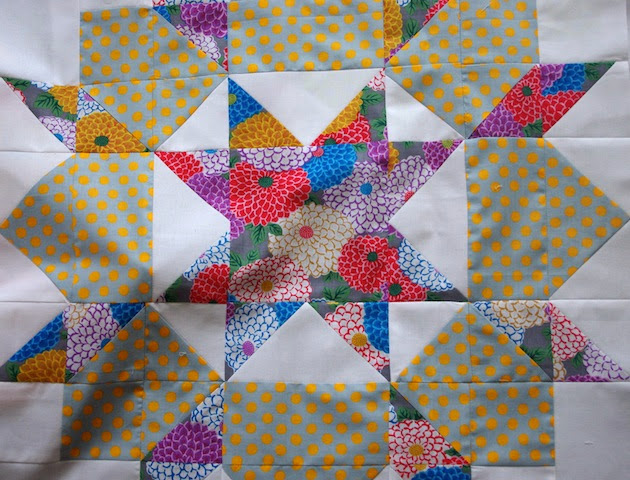 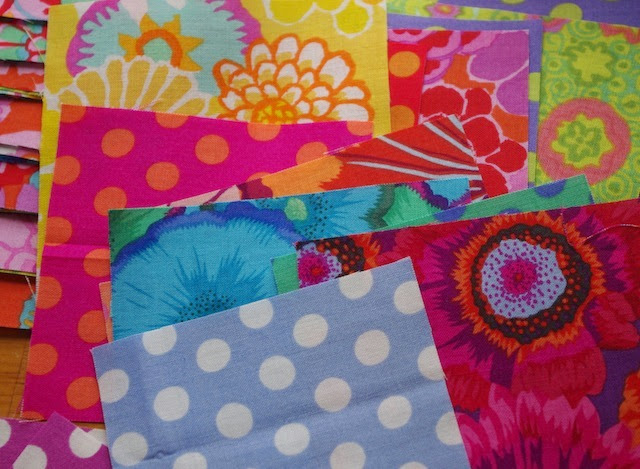 I always head into the new year with a little bit of hesitation. You know something rotten is bound to occur in the year ahead - you know this more definitely each year. But lots of good stuff too. Stuff that is already happening like watching the 'Hollow Crown' series with Marion or reading Mary Pope Osbourne's version of the Odyssey while reading Penelopiad by Margaret Atwood at the same time or sledding in an unabandoned and ridiculous way down our hill. All good, all colorful. Wish you all a happy start to the new year.

The merry months of November and December

Thanksgiving seems a while back. We picked up our turkey from Ray and the house got an extra deep clean. This year with added a tablecloth filled with demure hens and big old wild turkeys in each corner. We were excited to light the chandelier and celebrate our first T.Giving in the house.

Charlie's Birthday followed a week later with more cake and candles and another broken arm. I have to add that in for historical fact. Two broken arms, it broke a few records too. 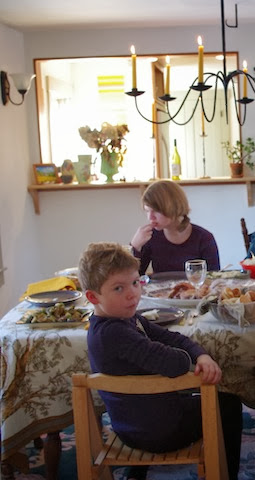 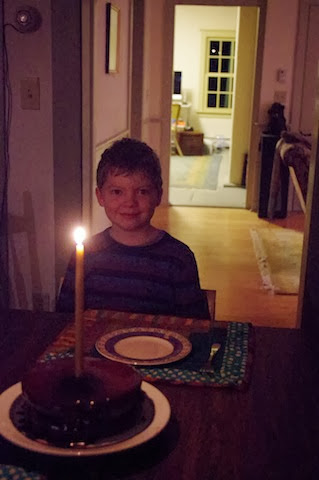 This year we decided to cut our own tree. There is a farm down from where we live that grows trees in all sorts of sizes thus fitting the bill for our annual argument around the size of the tree and negotiation around how long the tree should stay in the house. I am a traditionalist, I say the epiphany and it should be down but Charles is a sentimentalist. Ah, what's the hurry, he says. We'll see. I suspect I am a weak traditionalist but I know he is a strong sentimentalist. 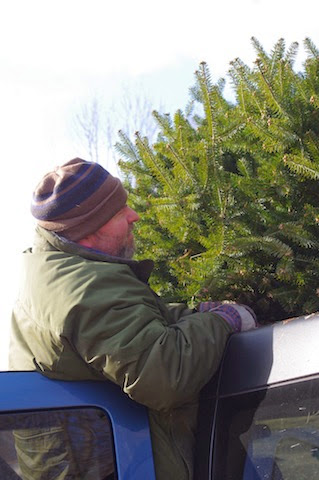 The tree really is beautiful this year. Father Christmas arrived, we enjoyed a peaceful old Christmas day. I look at the picture below and see how new our house looks. I still haven't made decisions about what to hang and where. Should I put up curtains and if so what and in which rooms. All that stuff, it takes years to settle into a house. I am glad there is snow on the ground right now because that just adds to the list of decisions. 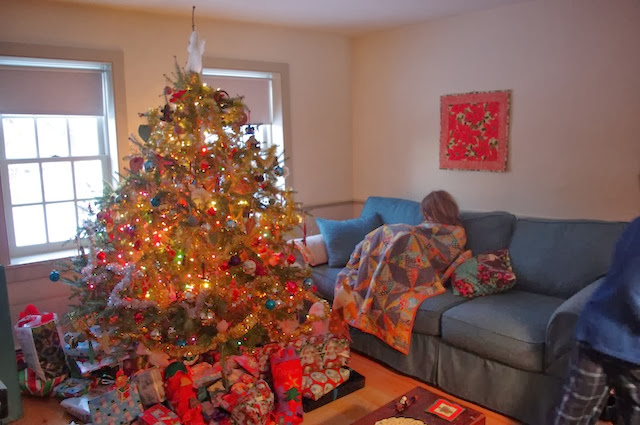 Boxing day and all is calm. Charlie drank tea and ate gingerbread cookies. 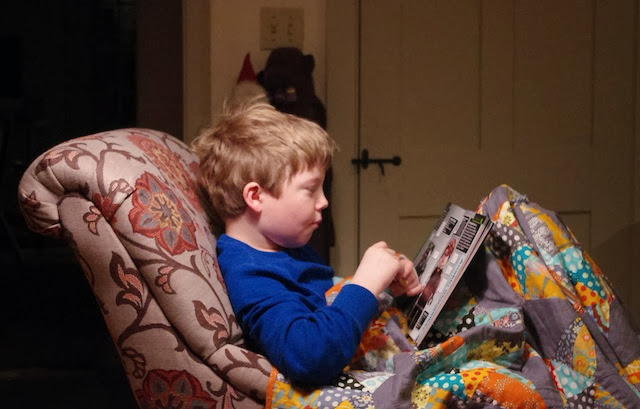 Last night there was a nice big snow storm. The snow flakes were so big that there has to be a name for them. I run in to this problem a lot up here in New England. There are not enough words to describe the snow. Remember Smila's (something about , was it sense of??)snow, I learned from Smila that there were many many different words describing snow and I don't believe it is the case here. This leaves me with inadequate words to describe last nights snow except to say unusually large snow flakes that dropped to the ground at an alarming rate. There should also be a word for snow flakes that take the power out. We lost power after about an hour of the U.L.S.F. and were thankful for the candle chandelier and the LL Bean headlamps. More snow afoot it seems, I wonder what kind. Something I didn't know until I had snow and children is that it is fun to stand in the snow with your mouth open and try to catch a flake or two. 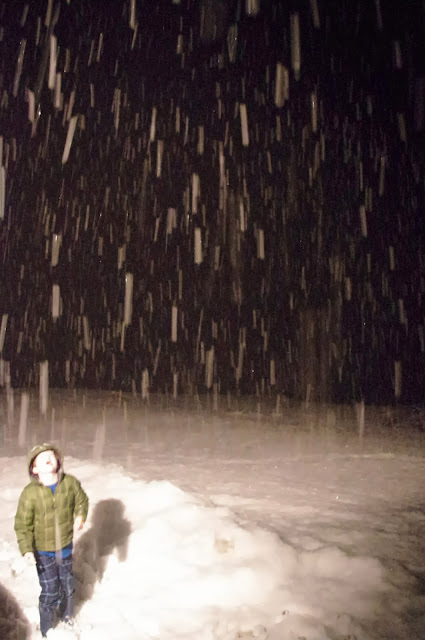 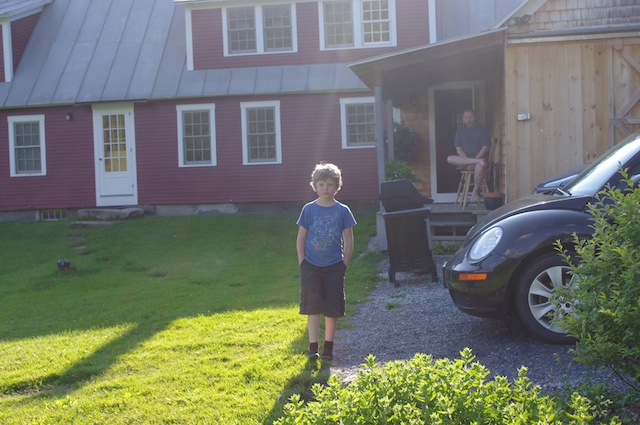 We moved finally. It was June and everything happened at once, the end of the school year, farmers market, graduation time but we made it. 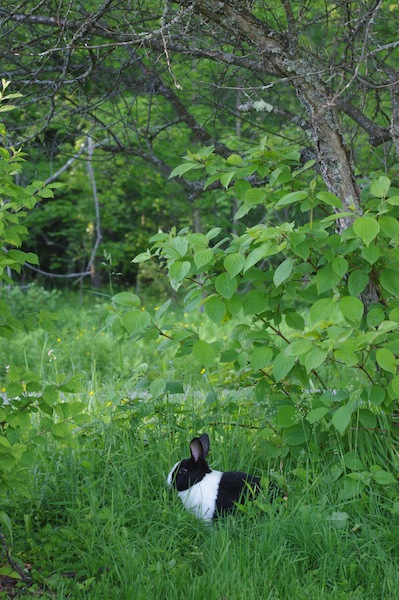 Loki found that he liked it better outside than in. He has been outside ever since. Very cute. 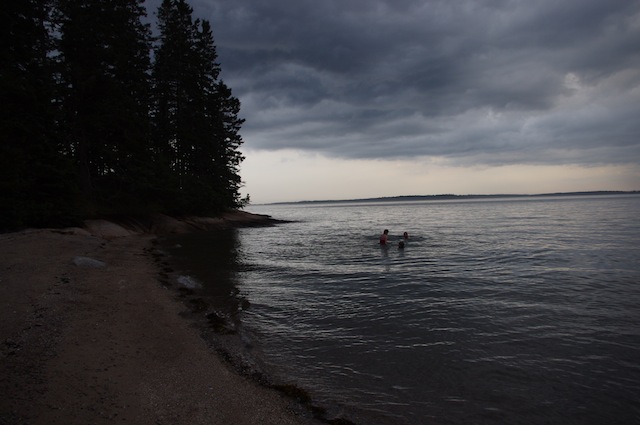 And then we went to Maine for a blissful family vacation. Now we are back, Mum's here and we are gardening a lot. We have discovered we love gardening. 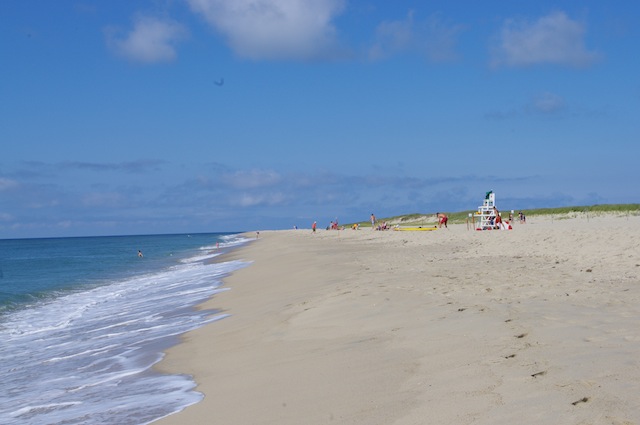 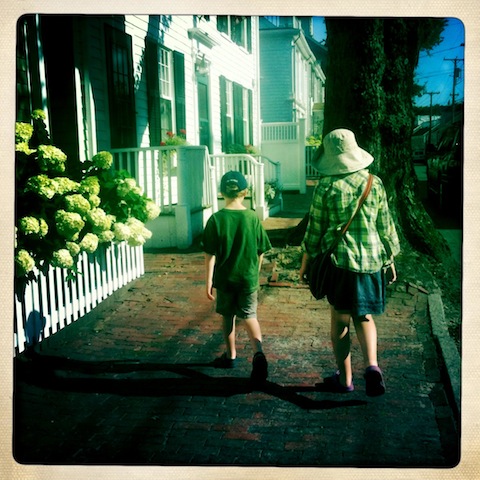 Carolyn
United States
A baker's wife, mother, waldorf teacher and, you know, the like. We live happily in the Upper Valley of Vermont.